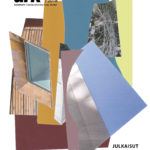 The media is increasingly reshaping the world around us. In the current age of fast consumption news feeds are flooding our screens with issues ranging from social phenomena to products of urban culture and the latest global trends. Cultural transitions are often made visible through publishing, and architecture is no exception in this respect. Books, manifestos and magazines record debates and highlight new subjects that are of interest to new generations. This first 2018 issue of Arkkitehti addresses the significance of architectural publications in our time and their future prospects. It provides a summary of the views of ten publishers representing different countries and types of publications, ranging from established to experimental with projects such as San Rocco, Cartha and The Funambulist. On the international scene, the discourse on publications remains lively as they provide a channel for an increasingly polyphonic architectural culture.

This issue will also provide an overview of temporary installations that are becoming an increasingly permanent part of the urban scene. A wide range of events and festivals generate urban spatial experiences at the interface of architecture, environment art and design. We showcase of a number of temporary projects created by the Helsinki Design Week, Flow Festival and the Lähiöfest. Mobile Home 2017, a centennial project launched jointly by four Finnish cultural institutes, focuses on the importance of the home. Eeva Berglund reflects in her article on the concept of the home, the changes in the perception of the home and the conflicts created by growing economic inequality. Furthermore, professor Pirjo Sanaksenaho writes about the role of housing magazines in creating the modern ideals of home in the 1950s and 60s.

With this first issue of Arkkitehti in 2018, we are also launching UU AA, a project exploring the new form of our publication. As a temporary and experimental undertaking it will invite direct feedback from readers in Finland and abroad. We will report on the progress made in the project in all issues of the magazine throughout 2018.

Editorial | Towards something new. But what?
Mika Savela

Constructing the ideals of a modern home
Pirjo Sanaksenaho

More than a feeling
Leonard Ma

An observer of contemporary Finnish architecture since 1903.